As participants of the 11th Balkan Anarchist Bookfair, held in April 2017 in Zagreb, we want to express our concern about certain issues and solidarity with ongoing social struggles in the wider region of the Balkans and Eastern Europe.

Firstly, we express our solidarity with all the arrested and physically abused protesters in Belarus. During the last months, thousands of people in cities throughout Belarus protested against the discrimination and higher taxation of unemployed in Belarus, stipulated by Lukashenko’s so-called ‘social parasites law’. As a network of anarchist and anti-authoritarian activists in the wider region, we declare our full support of their Struggle. In our opinion, recent events in Belarus show once again that red-painted authoritarian regimes are no alternative to neoliberal states. The stakes are high not only for Belarusian workers and unemployed but for all of us because once the law is fully imposed it might serve as an example for other states in the discrimination, harassment and persecution of and war against the unemployed and poor.

Secondly, we want to draw attention to the ongoing so-called pro-life, i.e. anti-abortion, and anti-gay campaign organised by the Romanian Orthodox Church together with Christian and nationalist organisations in Romania. In the past two years, the ‘Coalition for Family’ collected about 3 million signatures (out of a population of 20 million) in order to impose a referendum whose goal is to change the definition of marriage in the Romanian constitution. If the referendum passes, marriage will be defined as the union between a man and a woman. This way, a legalisation of gay marriage will be rendered impossible. As anarchists and radical feminists, a state-approved gay marriage is not our main concern but rather the antifeminist and homophobic movement forming around this campaign and the increasing state control of women’s and LGBTQ+ persons’ lifes and bodies. After that they have promised to take on the restriction or even ban of abortion. On March 25th, 2017, the Romanian Orthodox Church have already organised a pro-life march. Tens of thousands of people were rallied across Romania and the Republic of Moldova. They took to the streets with positive messages, smiles, hearts, rainbow colours and balloons. This way they obscure both their patriarchical project and its violent consequences for women and LGBTQ+ persons and the participation of militant neofascists in the march. During the Bucharest pro-life march three persons were attacked and chased through the streets by a group of fascists on obviously homophobic grounds.

This reactionary movement is international. Exactly the same pro-life and anti-gay campaign is run in Croatia, too. The anti-gay referendum has already passed successfully in 2013 and the constitution has been changed. The anti-abortion campaign is in process.

We express our solidarity and stand side by side with the feminists taking to the streets in Zagreb on March 8th, 2017, and our anarcha-feminist comrades attacked in Bucharest on March 25th, 2017, and their self-organised struggle for queer and womens’ liberation from patriarchy and the state. 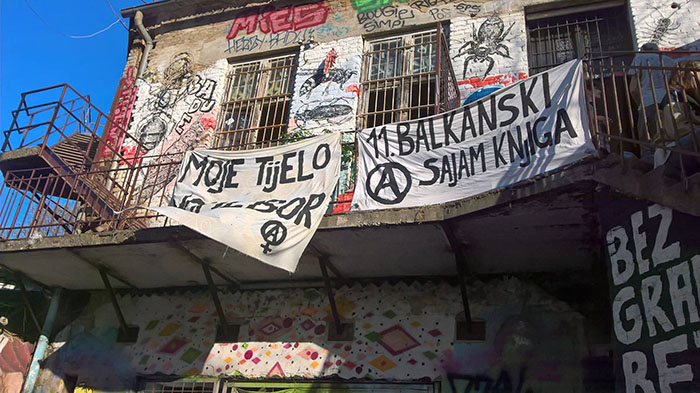